Dodged a hot mess of a day 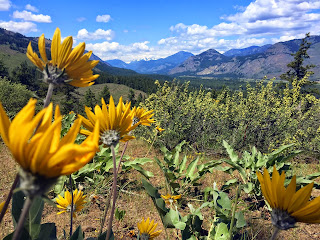 Hell of a weekend. Man was that some fun! If you ever want to humble yourself, in two ways,  go plant yourself on course surrounded by sweeping vistas of mountains and valleys. I think too many people forget how small they are in the scheme of things. Next sit there in the shade as 100’s of people pass by in 80 degree weather running in the direct sun. Nothing but deep respect for those racing the 50M/50K on Saturday.

Alley ran the 50K and I couldn’t have been prouder of how she handled her day in the heat. As well as our friends and housemates MCM and Kay!

To say the least I was a bit worried about the heat for my race on Sunday. I haven’t done well in the heat for the last few years and Saturday I was sweating in the shade. Ugh. I kept drinking and eating as much as possible, but man that can get tiring throughout the day.

All in all, worth the risk to be out supporting friends on Saturday. plus I got to go on Moose Trail! 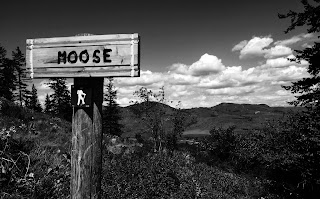 Sunday morning –
10am race start sounds great, but man not if you wake up at 5:45. My stomach wasn’t feeling right all morning from the time I woke up. Had the usual breakfast no surprises there and dinner wasn’t an issue the night before. Finally rolled out to the start about 8:50, but stomach still not on board. It had been raining hard through the early morning so the worry of being too hot during the race wasn’t a factor. About 42 degrees at race start. I headed out for a quick few miles before the start to get the body ready. I felt tight and my left foot was aching a bit, I climbed a bit and turned back to see how the knees felt on the downhill and all systems felt ok, barring the stomach.

I was laughing with Alley before the start because I had Shakey Graves “Built to roam” in my head:
Sit back and watch me go,
Bored and lazy.
Watch me go;
Just passing through.
Follow me beyond the mountains.
Go howl at the ol' big moon.

It sounds like something a snail would use as a race theme song. But none the less it was stuck in my head.

The start was fast, or should have been.

The group of 8 or so people in front of me pushed back instead of forward. Odd, it was cool to see the people from the sides funnel in front of us. I usually never worry about bad starts, I feel like it keeps me from running too fast at the begin and sorts out a mile or 2 down the trail. 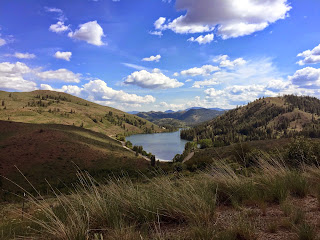 We hit the lake and I was with a good group of about 8 people. Roughly 8 minute pace. I knew at mile 2 a 2 mile climb would start, after that another 4ish mile climb, so I backed off a bit only pushing at a comfortable pace. On the climb I did intervals of 45 seconds run, 15 seconds power hiking. Easy run on anything that wasn't up.

I was sweating  badly and my stomach felt like I was running with a watermelon under my shirt. The climb twisted up through some outlooks that only revealed cloud cover over the nearby mountains and foothills. Still awe inspiring, and the banks of mist and fog we ran through was much needed.

Surprisingly enough I was actually running when I glanced over and saw Glen as the trail went through amazing hillsides of wild flowers. At least it felt like running  : )

Some short flat(ish) ridge lines had the group of 5 of us at 6:50 pace. I was having trouble with the asthma but didn’t want to reach for my inhaler. I know, but sometimes the little movements seem like a huge effort. At this point my left IT band started to pull and pinch a bit. Rounded a sharp corner and someone yelled, “aid station qtr mile up.” What a grunt up to the AS, about mile 8.6.  The group of 5 turned to 3, turn to 2. From there it was just over a mile to the downhill. *tongue licking lips, tail wagging on high. However, the service road was in bad shape from the rain, the sides were too soft with mud and the middle was hard and really hurt my left side.

From the profile I needed about half a mile to the downhill, but this damn service road was NEVER going to end. Finally I saw the person in front of me by about 40-50 yards pull off the road and heard a loud.

“FUCK! Ugh JAMESSSS!” I knew, as Alley put it before, that was the sound of the Rainshadow Effect. The service road was steep, but the trail off the road was crazy steep.

Finally I hit the downhill, about 1.5 miles, but the hips wouldn’t give it up. Both hips a bit frozen from the 9 miles of climbing. I skipped a bit at the beginning to sort of jumpstart the hips, has worked in the past. And slowly they came around, about a minute in. I could see the group, 4 about 20 seconds up, and wanted to catch and be past them before too long.

"As fast as a body can drop" - Adam Hewey

Downhill and closing speed amazes me, the whole gravity thing. I love it.

First person about 10 yards in front, technical footing, I bound and jump into the pull of gravity. Like hauling ass on a snowboard, or what I image downhill skiing would be like. Pulling the legs up towards you to drop faster. I have to remember to breathe. Before I say on your left I’m by him. Two more about 15 yards up, I’m coming in hot and yell on your left. It’s a game, the best game ever. The two yell out as I pass, “Yeah, get it!” I know there’s one more up here, spot her and pass as she laughs and yells, ”Where the hell did you come from?!?!”. I run out of decent just as I spot 3 more runners (rabbits). 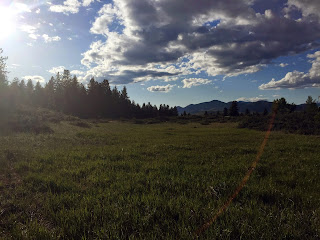 A sudden uphill puts the game at bay for a few then it opens again. This time on a descending service road. Not my fav, but I can still gain on others. Pushing 6:25 pace, trying not to blow up.  I run small stretches with my eyes closed, repeating “let the legs work, rest the heart” and feel my pulse calm. I catch two of the three. As I pass the woman I’d been chasing for the last 3 miles, strong woman, I tell her “stay in it, under a mile.” I struggle to decide whether to lay up at the top of the little false flat, then hear horns and cheers from the woods just in front of us. I bolt through the sharp left turn and suddenly realize it’s the little area I took my morning warmup run on.  I bit of a downhill so I went all in ignoring the voice in my head yelling to stop and play it safe. Crossed the road and was happy as hell to see the finish line, high fiving James as I crossed the line. Phew!

Not my most ideal race. I had fun moments in it, but the stomach thing to start the day and the IT and foot cramping during. I felt I lost a minute or 2 on the road section due to stopping and stretching the IT. The foot cramp, it hurt, but I knew it was just a cramp. It wasn’t going to break or anything.

I can’t stress enough how looking around when things started to hurt and repeating, “Look at what you get to run through. This place is amazing. Be thankful you get to hurt in a place like this.” I ‘am proud that I didn’t give up throughout the race at any point, even thou I kept lining up my reasons to stop and have a great pity party. I saw too many people the day before pull themselves through way worse conditions to do that.

Next up is Deception Pass and Taylor Mt Half before Crystal Mountain Marathon.
Hope to see a few of you out there! –Bill